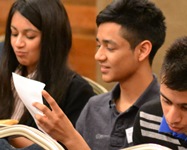 The London Oshwal Youth team is an idea inspired from last year’s Enterprise Programme, whereby UK university students went to Kenya to see a host of different businesses and industries. Thereafter there were suggestions of hosting regular events for the youth by the youth in Central London locations. With this in mind, the first event was held back in November 2012, called An Enterprise Evening. Following on from the success of this event, the 2012 Enterprise Programme students helped organised a second event on Thursday 28 March 2013, at Grand Connaught Room, Great Queen’s Street, WC2B 5DA. This time the theme was “Invest in Africa.”

After a short welcome and introductions, Bhavik Jayendrakumar Shah, Co-founder and Director at Niveda Group gave a short talk on the importance of negotiation skills. Bhavik drew upon his own work experiences to outline some key tips about negotiations. 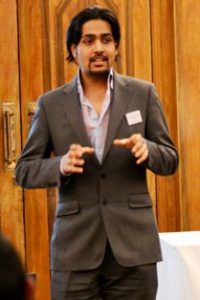 Bhavik went on to outline the main obstacles to achieving successful negotiations in Africa as follows:

a. Limited access to accurate and reliable information.
b. Limited mediums of communication and language barriers in some countries.
c. Differences in cultures, ethnicities and tribalism.
d. Poor financial services sector that restricts the scope to perform efficient transactions.
e. Corruption and bureaucracy within the public and private sector.
f. Low levels of skills and expertise of decision makers in some organisations.

Bhavik then concluded that “these obstacles also present opportunity for investment purposes as entities (individuals or companies) that possess unique advantages within the business environment can capitalise on them comfortably with little competition.”

The five countries were Ghana, Kenya, Nigeria, Tanzania and Uganda – but each team were only provided with information for three countries. In order to obtain information about the other two countries, teams had buy and sell the information between each other at a price which they negotiated. Each team was given a budget of £1,000 and they had to negotiate a price for each piece of information between £50 and £250. All teams were give specially issued bank notes issued by the Bank of Oshwal!!

Teams had about 45 minutes to negotiate the purchase or selling of the information and come up with a winning investment strategy, which had to take into consideration all five countries. Teams engaged in an exciting round of negotiations and also were presented with a special edition of Oshwal News Online Business bulletin, which outlined some key developments in the five countries.

A brief highlight of the OBPN was provided, an initiative seeking to create and maintain a support structure for all Oshwal members, specifically in areas of mentoring, career guidance, recruitment, business helpline, work experience, internships, personal development, post work-life activities, etc. This will develop, harness and increase the overall wealth and intellectual capital of our community in the UK and globally.