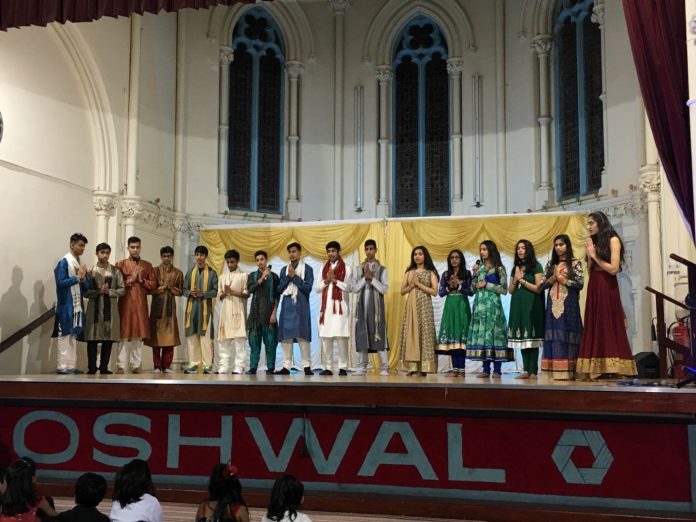 On the 26th of November, the prefects of Oshwal Gujarati School hosted a show completely prepared by us. We based our show on the theme of ‘Bollywood comes to London’. We came up with this idea because we were thinking about if Bollywood films were not made, then the younger generation would definitely not be as in touch with our Indian roots and culture. Nowadays, many countries are multicultural and 1.4 million Indians have migrated to the UK. We started to think of songs and/or movies that relate to London. This could have been if they were filmed in England or in any way related to British culture and tradition.
The prefects had been planning for this show since Gujarati School started on the 10th September and we began to collect sponsors, donations and making key decisions about what we want on the day. Yogeshbhai reminded us that it was the 21st anniversary of the Prefects Show so we decided to celebrate it with a cake. After Diwali, we arranged practices on Tuesday and Thursday’s in the evening and Saturday after school so that the children could choreograph and learn their dances. At these practices, we left the older years to choreograph their own dances and a couple of the girls worked on the younger years’ dance whilst the rest of the prefects worked hard to create a fantastic dance to perform on the day. Finally the weekend was rapidly arising and we still had much to do. We were starting to bring in money by selling our tickets before and after Gujarati School. On the day before the show, we arranged for a few of the prefects to come to Mahajanwadi so we could set up for the show. We used a gold backdrop kindly lent to us by Rekha Dodhia and with the dads help we were able to put it up along with the chairs and the tables. Meanwhile, in the kitchen the mums along with cooks- Premilabhen, Pushpabhen & Damyantibhen were preparing the food. On Saturday morning we were busy doing last minute preparations and practising our speeches and perfecting the decorations. On the night, we had around 180 people arrive and at the end of the show we got many comments on how it was a brilliant success. We had about 45 minutes of the children’s dances. After, we brought in the cake; we gathered all the prefects, students and past students around the cake in order to cut it. Yogeshbhai said a few words about the history of the Prefect Show and then the prefects started serving the food. Whilst everyone was eating dinner, we had Anish Shah perform a few songs. After dinner, we had a quiz where the audience had to guess the popular song. After the quiz, we brought out the 8 raffle prizes donated by several generous people and we picked 8 little kids to pick out the tickets. Organising and taking part in the prefects show was one of the best experiences we have ever had. We learnt so many new skills in the 2 months that we spent organising and getting ready for the show. For example, we had to call up different companies and ask for sponsorships. We also learnt how to stay within our budgets when spending money on food, tickets, drinks, decorations, etc. We enjoyed the experience of getting to work together with our classmates and their parents and families. And most importantly, we enjoyed seeing our show come to life after several weeks of preparation. Our show wouldn’t have been made possible if it were not for everyone who helped on the day and in the days leading up to the show.

Thank you to everyone who came; helped or simply supported our show. We are extremely thankful.

You can view pictures from this event on our Photo Gallery

Back to South Area page.