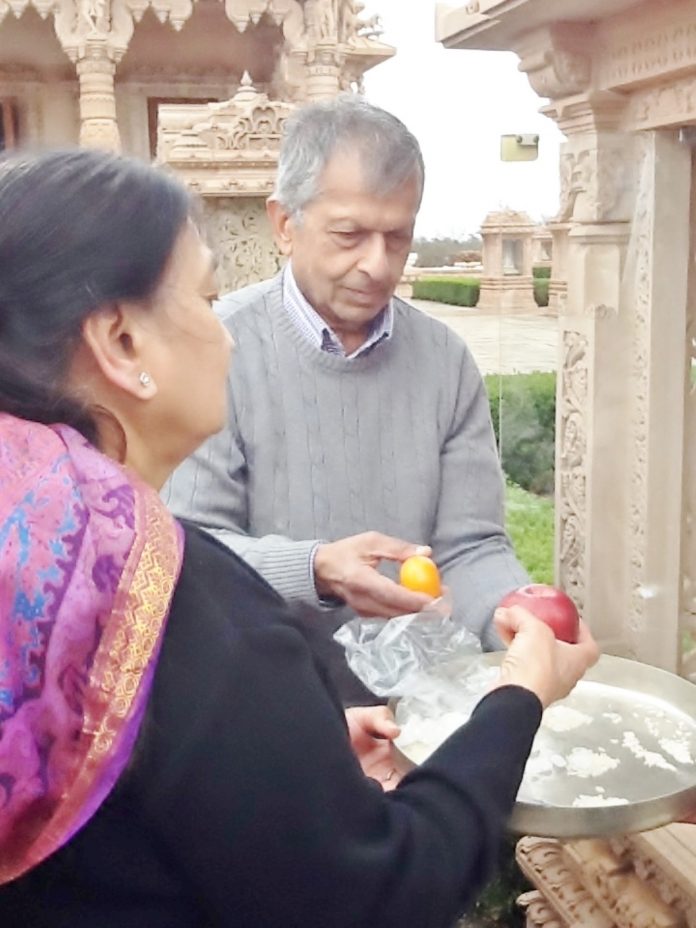 A Tirthankar is a traditional holy man and women of Jainism who belong to a group who have attained personal immortality through enlightenment, and by their teaching to have made a path for others to follow.

On Sunday 12th February and 19th March 2017 we held out first 24 Tirthankar Satsang.
The event started off with Jayesbhai leading the prayers by everyone praying to the 24 Tirthankar Murtis and altogether we lighted 24 candles.

There after everyone did Chaityavandan and Bhakti together.

We stuck on the wall 24 Tirthankar pictures which we had laminated so everyone could see as well as the 24 murtis.

We started satsang with the first Tirthankar which is Bhagwan Rishabhdev who is also known as Adinath Bhagwan whose symbol is a bull. He is also one of the Tirthankars on the left as you walk in our Derasar.

The first incarnation Bhagwan Rishabhdev was in Mahavideh Shetra as Dhannaseth. In his town he was a very kind and helpful to everyone. Dhannaseth was a big businessman and he had to go away for this reason. So he asked everyone in the town who wanted to come and join him and he promised everyone he would look after everyone.

In the same town there was a big Maharaj whose name was Dharma Gosh Maharaj who also wanted to away with Dhannaseth not for business reasons but as a pilgrimage. Dhannaseth also promised the Maharaj that he would look after him too.

While travelling they all looked after each other. At that time it was monsoon season so travelling was difficult so they stayed in one place for 4 months. All the food that they took with them was all finished so they started to pick ripe fruit of the trees.

While feeding Dharam Gosh Maharaj Dhannaseth felt bad that he forgot about the Maharaj as he promised to look after him but on the other hand the Maharaj praised him too. Thereafter the Maharaj sat with him to do Satsang.

The second incarnation Dhannaseth became a Yugalia (twins) which was part of the Kulkar system. A human couple used to give birth to a twin where one was female and one was male. This twin would become husband and wife on reaching adulthood.

The forth life was where he was in heaven. Here is name is Mahabal Raj Kumar. He had loads of money so he spent it on everything matristic and enjoyed with his friends.

The fifth life is where he is in heaven again. His name is Lalitangdev. Here is remembering his past. In heaven he met a lady called Swamprabha and fell in love. The mantra from his past his forth life came into the fifth life as his friend. He is getting the right way of life from his friend.

The sixth life is where he is in Mahavidev Shratra. His name is Vagra Jang Raj Kumar (Prince). Here he meets Swamprabha taking the name of Shreemati and they fall in love again. They get married. After this life he moved on the seventh life.

In his seventh life he became a Yugalia (twins) again.

In his eight life he went into heaven again as a dev. From his past Swam Prabha became his friend.

In his ninth life he became a Vidh where his name is Jiva Nanth Dev. He had gained five friends. From his past life Keshav came in this life as a friend. They met a Guru Maharaj who was very ill and they helped him. After helping him they realise they take Diksha.

In his tenth life he was in heaven again.

When the soul was conceived mother Marudeva dreamt of fourteen auspicious things. The first thing she saw in her dream was that a beautiful and large white bull.

He was given the name of Rishabh Kumar who got married to a girl named Sunanda.
Prince Rishabh led a happy married life. In due course Sumangala gave birth to Bharat, Brahmi and ninety eight other sons. Sunanda gave birth to Bahubali and Sundari.

For a long time Bhagavan Rishabhdev continued to preach about the religion with the five great vows being the main theme. After observing a six day fast without water he became a Siddha, a liberated soul which has destroyed all of its karma.

Altogether Bhagavan Rishabhdev had 13 lives. We have only written a few of them.
Approximately we had 100 people attend. We had people sitting on the floor and on chairs. Everyone who attend enjoyed the event.

Today we also had the family who donated money for the first deri come and Jayeshbhai led a vidhi with them on the Jinalay complex.