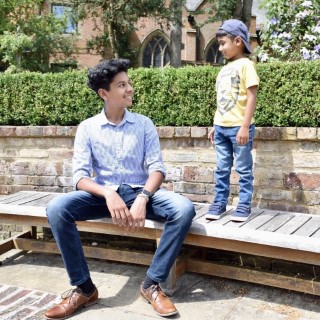 15 year old Aadi Soori, son of Nadarajah Sooriyakumar and Bijal Sooriyakumar, is an up and coming singer/ songwritter and music producer. Upon hearing about the plight of a 4 year old boy called Veer Gudhka, he decided to write the song “Looking For My Superhero” to help raise awareness.

Veer, son of Nirav and Kirpa Gudhka, is 4 years old and has a rare genetic disorder called Fanconi Anaemia. Due to this, his bone marrow is not functioning properly and is in urgent need of a stem cell donor.

Aadi’s song launched on Saturday 25th July and you can hear it by streaming it online on all major platforms such as Spotify and iTunes. He also directed and produced an astounding music video too, which can be viewed on his Youtube Channel: Aadi Soori. His generous nature came to light when he revealed to everyone, on the day before launch, that all money made from the streaming of the song will be donated to Veer’s cause.

The reason why Aadi wrote this song and the lyrics behind it is to help raise awareness for stem cell donors and to help veer and many others find their superheroes.

His mum said that she has always encouraged both her boys, Aadi and Areyan, to be selfless and treat others the way they would like to be treated. She is very happy that Aadi can use his musical talent to help others.

His dad said that Aadi’s talent for music was and still is so natural and that he is a very compassionate person, always wanting to help others.

Aadi started composing songs when he was eight years old. During lockdown, he produced his first single “Couldn’t Say Goodbye” after feeling the frustration of his mum, who lost her cousin brother Sandip Premchand Shah and couldn’t pay her respects to the immediate family. This first single has provided comfort and solace to many people across the world who have lost loved ones during the Covid-19 pandemic.

He is currently doing a Diploma in Canartic music and is starting grade 7 in Keyboard. Aadi has ideas for several more songs and over the coming months looks forward to perfecting and releasing them.