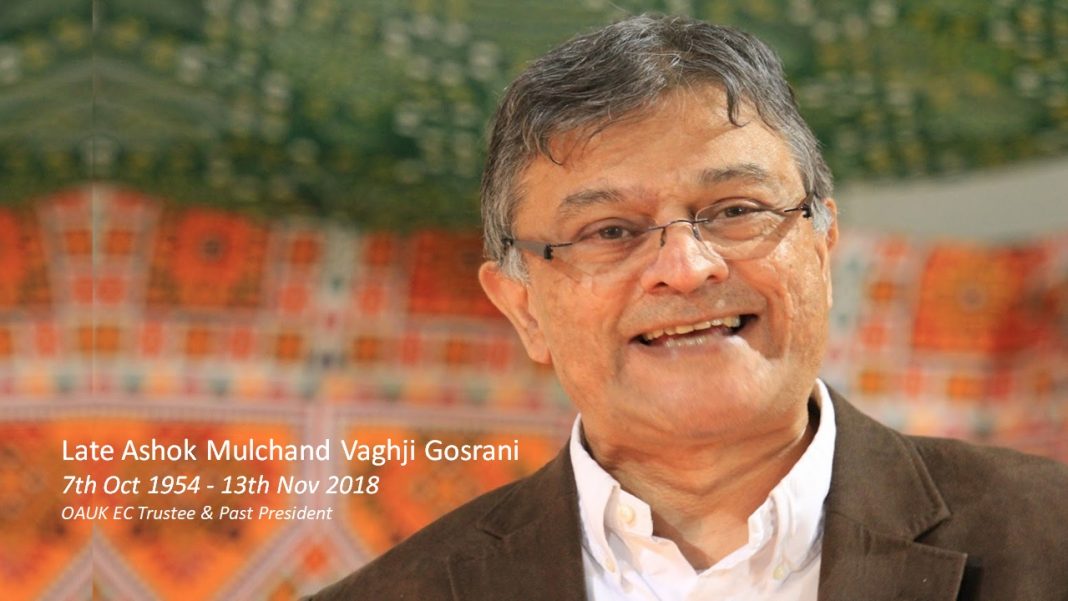 Today we have all gathered here to pay our respect and prayers for Ashok Mulchand Vaghji Gosrani.

Firstly, I would like to thank the family of Ashokbhai for giving this platform to say few words. On behalf of Oshwal Association, executive committee, area committee and Board of Advisors our sincere condolences to his whole family.

Ashokbhai was Colleague, a friend, a Buddy and above all was a true oshwal who had given his time and dedication for our Oshwal Samaj. His dedication was not 100% but I would say more than 100%. His heart was always for our Samaj.

He had been Chairman of North West Area and served on the Executive committee for many many years. He was the only Trustee who had hold the four positions of Officers Bearers Position on Executive committee i.e. President, Vice President, Secretary and the Treasurer. In addition to that he had served for many portfolios at EC i.e. Religious, Fund Raising, Membership, external event coordinator, etc. In 1997 he was the instrument to commence the works of our Jinalay. He had instigated the laying the foundation of Jinalay at that time which was subsequently completed in 2005.

I share my recent memories with him in February. Ashokbhia and I were first to arrive at Jamnagar for hosting medical Camp in Jamnagar for 9 days. He took the lead in coordinating the Camp and many of us had spent time with him during camp and Visiting Macchu Beraja for laying the foundation of the School. I am sure many who came there will share his positive thoughts.

There will be big gap for the executive committee to fulfil his position for his valuable contribution given. His thought was always positive for the Samaj. During our EC meetings he would say let me give my 2 pence of thoughts on many decisions we took. No task was difficult for him and would always say let’s do it and give his backing to all of us.

Not only will he be greatly missed by his family but by the whole community. We pray to god that his soul rests in peace and pray to god to give his family strength to go through this difficult time.