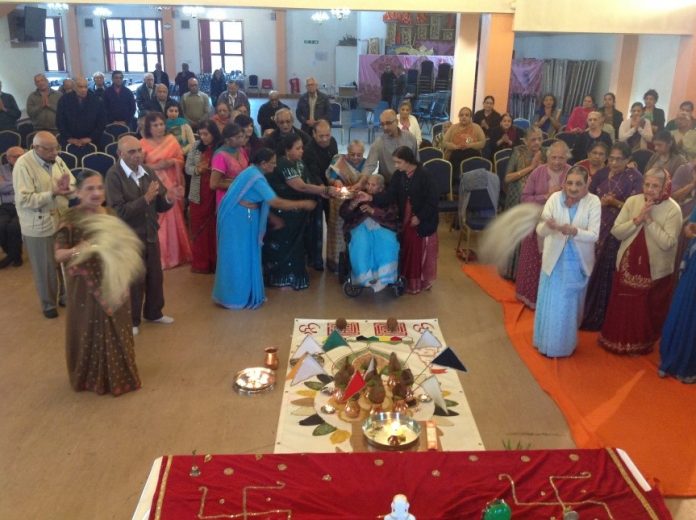 Once again, Aymbil Oli was conducted at Vaghjibhai and Maniben Shah’s residence for which we are sincerely grateful. The number of attendees has drastically reduced over the years with only 4-6 devoted members attending the Pratikraman this year with a few other members joining in afterwards. Nonetheless those attended heard Lata Hasmukh Shah and Maniben Vaghji Shah narrating a Pravachan sent by Maharaj Saheb from India. The evenings concluded with Aarti, Mangal Divo and the distribution of Prabhavnas.

This year Mahavir Janma Kalyanak was celebrated on Sunday 8th April 2018 at Shree Sanatan Mandir. Besides the arrangements prior to the event, the day started with the catering team under Chiman Meghji Haria and Nila Sudhir Haria. Volunteers arrived to help with the event from 7am in the morning. It is remarkable to see how all got on with various activities … from cleaning the utensils to chopping the vegetables, from the ‘vaghar’ to the setting up of the tables and chairs. It was also pleasant to note that men helped out with the ‘goinas’ for puri this year. The volunteers who helped out in the morning were treated to ganthia, saata, biscuits, mircha and sambharo for breakfast. 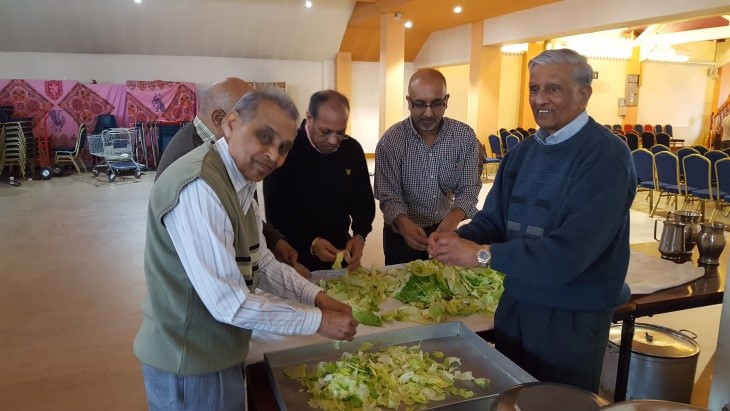 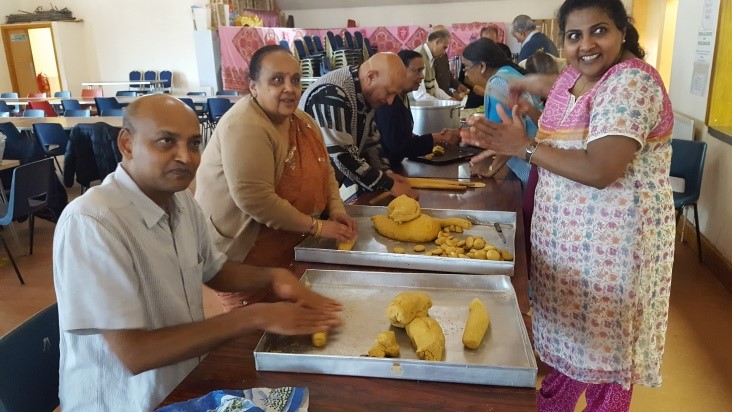 Under the stewardship of Lata Hasmukh Shah, religious portfolio holder, arrangements gotunder way for decorating the Siddth Chakra Patt. Here too, the men joined in with the decorations this year.

After the recital of prayers, lunch of lapsi, channa nu shaak, salad, daal bhat, far far, dhokri, puri and chaas was served. All waited patiently in orderly queues as the volunteers worked tirelessly warming up and refilling the serving bowls. Approximately 160 guests from Leicester, London and Birmingham caught up with each other in a jovial atmosphere over the luncheon. 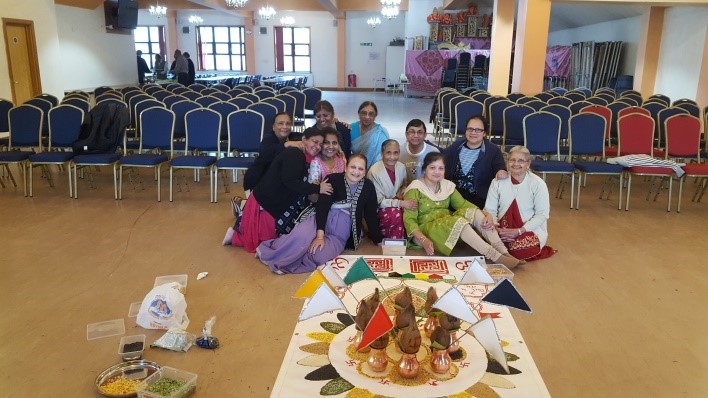 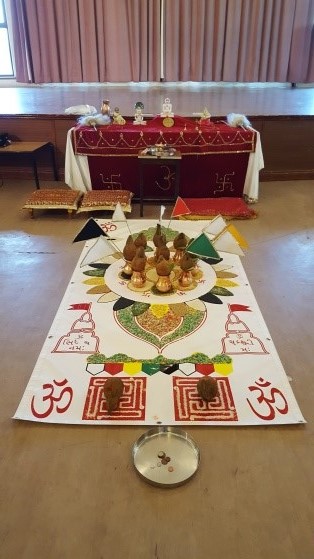 As in the past, we collected a significant amount of food items and toiletries to donate to the Red Cross to be distributed to homeless, asylum seekers and refugee families.

After lunch all settled down for Bhakti and religious entertainment. The programme started with Lataben singing the prayers followed by devotees reciting Stavans to celebrate the birth of Lord Mahavir. Premchandbhai Meghji Shah from London gave a talk on Jain Religion and explained what Jainism is and the true path to achieving Moksh. He stressed on knowing the qualities of Atma through which one can achieve Moksh as Lord Mahavir did, experiencing the knowledge and happiness as he attained Keval Gnan.

Our Chairman, Nikunj, also welcomed everyone and made a few announcements about upcoming events. He also thanked all the various donors who had kindly donated towards the MJK event as well as the donations for the Red Cross. He further thanked Jyotika and Ramniklal Gudka for donating towards the cost of the food. He especially thanked all the volunteers some of who had turned up since early morning.

The afternoon concluded with Aarti, Mangal Divo and Shanti Kalash. To end the day, tea, biscuits, ganthia and dhokri were served. Though it was a long day for some, everyone thoroughly enjoyed the function.