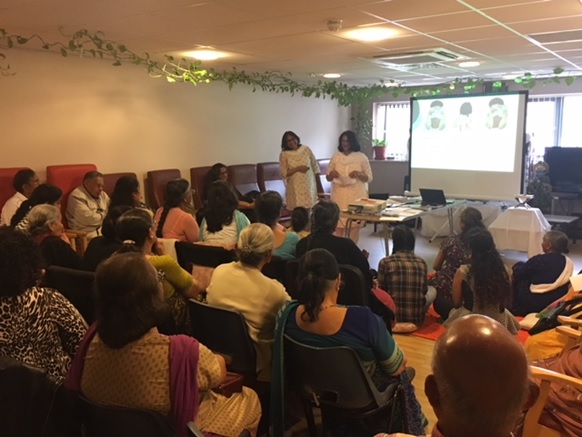 A full day’s pre-Paryushan seminar was organised with a view to giving us an insight into the history of Paryushan as well as some of the sutras. Though the initial uptake was a bit slow, we had filled the Manavta Day Centre to full capacity of 50 on the days’ just before with a couple of names on the waiting list. On the day, the Education Team from the Institute of Jainology consisting of Mrs Jyotsnaben Samji, Mrs Trushitben Shah, Mr Prakashbhai Patalia and Mr Altafbhai Samji arrived promptly and the event soon got under way by 10:15 am.

The morning session on the insight of Paryushan Parva was very well conducted with enough relevant material. The content was very well presented and captivated the audience making it into a thoroughly interactive event. One of the key elements that members debated upon was the mode and styles of invitations sent out prior to Paryushan in the past.

We had a lunch break of an hour where dhebra and moong shaak was served with pickles, far far and chaas. It was pleasing to note that members were actively going over what had been covered in the morning session.

The afternoon period based on the Essence of Pratikraman was quite taxing. There were quite a lot of sutras that had to be covered and it did feel difficult to digest! Perhaps, in the future we should have a similar but a rather deeper session on just a couple of sutras.
It was quite apparent that IoJ’s Education team were well read and knowledgeable; they delivered the message very well both in English and Gujarati. On the other hand, some of the local area members were equally familiar with the topics and a number of relevant questions were poised by the younger members too.

On behalf of the committee, we would like to thank IoJ’s Education team as named above as well as Mrs Vibhutiben Mehta for all their help in conducting the seminar, the various donors for the delicious lunch, members of the committee for their help and the members present for making it a truly interactive event. The seminar proved to be a sound foundation for the upcoming pious Paryushan Parva!

On the back of this workshop, English Pratikraman workshops were conducted during Paryushan over both days of the weekend this year. The main 6 steps of Pratikraman were explained in simple English and it was felt that everyone came out with a better understanding of the importance of Pratikraman, some of the sutras and why they are recited and also the meaning of the main sutras. It was very encouraging to note the interest it generated, the interactive dialogues and the request for more such workshops in years to come.