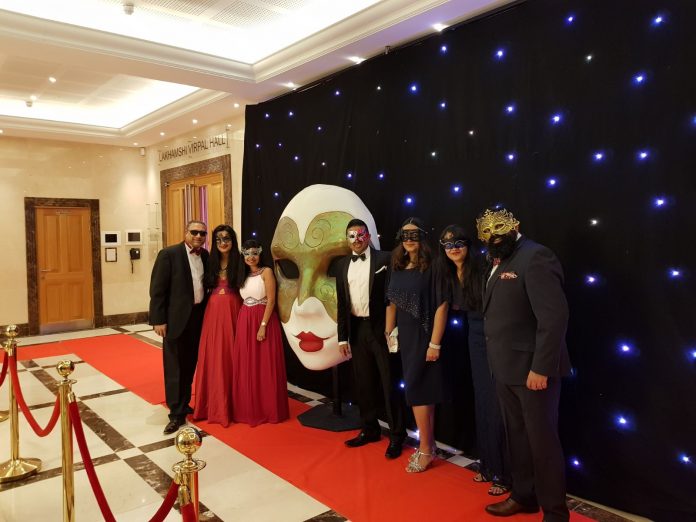 On Saturday 24th February 2018, the West Area Youth sub-committee organised Oshwal Centre’s first-ever Masquerade Murder Mystery night, an event which had been six months in the making! The event was designed to be an opportunity for people to experience something new as well as showcase the incredible talent and creativity we have in the Oshwal community. On the night guests had an opportunity to play detective to investigate a mystery enacted by our very own Youth sub-committee who transitioned into fine actors and dancers on the night might we add!

Given that the event was so close to the real life Oscars Awards show, it was a great opportunity to embed this feature into the plot and every guest was made to feel like a star from the moment they arrived; including being escorted by ushers on the red carpet whilst photographers took their paparazzi shots at the walk of fame whilst sipping on their very own VIP cocktails as they were ushered to their ‘celebrity’ named tables.

The plot itself was under the guise that everyone was attending a ‘Superstar Music Awards Show’ in honour of the deceased Mukesh Jackson – a fictional character with an incredible musical talent that the world has ever known. Mukesh loved masquerade balls and held a masquerade theme party each year as part of his annual tradition to raise money for a charity called Educate for Life. However, this time given his death, the awards show was in his memory as well as to find out who would win the much-coveted lifetime achievement award…The revelation on which celebrity would win this award led to the most gruesome, murderous antics on the night as key characters revealed their sinister motives to win the award! It is often said that the most common motives for murder are money, adultery and revenge, and there certainly were plenty of twists and turns that kept our detectives on their toes to guess the mystery!

The event also included a delicious three course meal which catered to all dietary requirements (vegetarian, vegan and Jain friendly); with a special thanks to Anjuben Bipin Shah and Sonia Estates whose generous donations went towards the food, Vijaybhai Shah who donated all the drinks for the evening and many thanks to The Cakeologists for donating the incredible desserts spread including cupcakes, mousses and nostalgic childhood sweets!

Throughout the evening, guests were encouraged to immerse themselves in the performance and put their detective skills to the test by questioning the actors to gain valuable intel on their back stories and potential motives for the killings. The performance concluded with guests providing their best guesses on who killed who and why by using an innovative real-time voting online poll. Everyone made a great effort with great attention to detail and team work to solve the murders. It was an extremely enjoyable evening with the added benefit of many talented, budding detectives being discovered in the process! The evening concluded with guests dancing away the night to the DJ’s beats in a true music awards show – after party fashion!

There were also epic raffle prizes on the night including a luxurious European holiday, an Apple iPad, a 32-inch TV and many more – for which we thank all the generous donors. The prizes on their own were a great incentive, however the raffle and the generous donations from people meant that the event was able to raise an incredible £2,401 which will go towards a great cause; Educate for Life which will help towards building a school in Maachu Beraja.

The feedback during and after the event has been phenomenal; people were truly excitedly spooked by the mystery the team laid on and there were even requests for similar future events! Some feedback included: “Epic event!”, “Amazing food and plenty of choice!”, “Quality performances!”, “Amazing transformation of Oshwal Centre! Perfect night!”, “Flawless!”, “One of the best Oshwal events to date!”, “Brilliant organization, inventive and thought provoking!”, “The organising team have set the bar so high for any future events! A true demonstration of what hard work and perseverance can achieve!”. Thank you to my organising team for the outstanding commitment, dedication and hard work for organising such a brilliant event which would not have been possible without Nimita, Arti, Rishma, Prakash, Roopal and Sarith. In addition, thank you to all our volunteers. Thank you to everyone for attending, we hope this event will remain a lasting memory for you and for Oshwal. Furthermore, the event truly demonstrated that anything can be possible when you have the right team, talent and dedication as well as an unwavering belief to bring joy and excitement to a wide range of people in the community!

All pictures can be viewed here