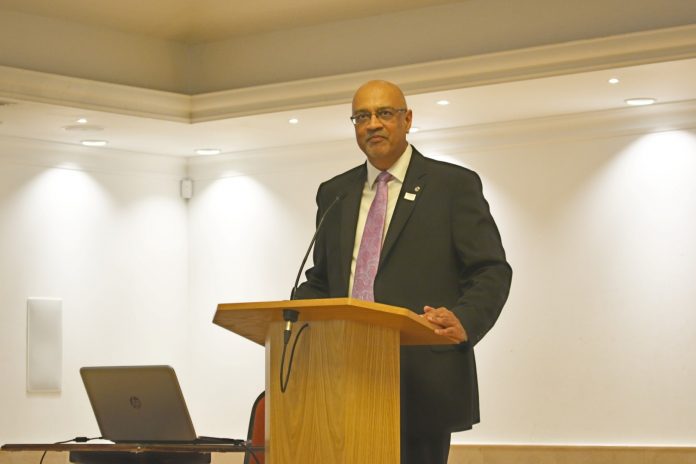 At a Special General Meeting (SGM) called in line with our Charity Constitution, the following items were presented and discussed and voted upon.

Nileshbhai, our OAUK Hon. Vice President, then provided a brief history of our Association from very humble beginnings in the 1960s and 1970s to the highly diverse, vibrant and thriving community our Association has become today, with some 15,000 members in 9 regional administrative Areas, supported by 4 community centres and a huge pool of volunteers serving on the Areas, Executive Committee and Board of Advisors Committees.

Tusharbhai, then outlined a detailed presentation of all three agenda items, beginning with Oshwal House.

Tusharbhai explained the background to our Oshwal House, build originally in the 18th Century and now is a listed building. There were two elements of the work which was required to Oshwal House. Firstly, the repair and refurbishment work required to ensure the good upkeep and maintenance of Oshwal House. Secondly, the extension work to the dining and kitchen facility. If undertaken such work would also refurbish the flats to the upper floors of Oshwal House. Thus, the refurbishment and extended facility at Oshwal House would allow to further utilise of the property with activities including (but not limited to):

Alongside the work to Oshwal House, would be the demolishing of the old sheds and the re-building of newer more secure and waterproof storage facility for our Centre.

Tusharbhai, also explained the while planning permission for a small extension to Oshwal House has already been received, OAUK was seeking a larger extension with a new Kitchen to better serve the needs of our growing Oshwal Community.

The overall project budget would be c£1m, with as estimate timetable for planning permission to be obtained from the Council by Summer 2017 and works being undertaken late 2017.

Tusharbhai, then explained the various aspects of the Jinalay Complex where there has been issues previously and which has been resolved to date, such as:

While these matters had already been dealt with, there were other issues which were still outstanding. These included:

The total project budget for this work would be c£500k with the estimated work timetable (subject to planning permission from the Council), being late 2017 to commence the works.

Tusharbhai, then explained the background to the Oshwal Vision, which has been evolving for over 4 years since it would brought to the attention of OAUK that the local Council is looking to review the Green Belt planning (which happens every 10 to 15 years) and as such OAUK had began a dialogue with Council for the potential development of Oshwal grounds.

Oshwal Vision was first presented to members back in March 2012 at a SGM, and further details of the Scheme were shared and informally presented to members during Diwali 2013. Thereafter, Welwyn Hatfield Council had an on-site visit in October 2014 with further meetings with Council planning officers in March 2015. OAUK presented detailed reports of our communities needs to the Council planning committee in October 2015 and the green light was given by Council to produce pre-planning documents and studies November 2015.
What this entails is providing the Council with many studies, such as (but not limited to): ecology reports, trees studies, highway & transport plan study, drainage plans, flood assessment, energy, sewage system, etc. Undertaking these studies alone is a costly endeavour, with estimated c£250k costs.

Tusharbhai, went to explain the overall vision for Oshwal grounds, to included:

Tusharbhai, provided an overall of the various plan drawings for the Oshwal Vision, explained the various components and different issues likely in each element.

Tusharbhai, then asked Ashishbhai to provide a brief overview of the financing of the Oshwal Vision.

Ashishbhai, our Hon. Treasurer, provided a brief summary of the financing optional available, such as:

Ashishbhai outlined summary of estimated expenditure likely to be faced by the Association in the next 18 to 24 months with the works to Oshwal House, Jinalay Complex and planning for the Oshwal Vision, as well as works at Ekta and Shakti centre to be in the region of c£3m. Expenditure in relation to the acquisition of a replacement property for South Mahajanwadi was ring-fenced from the funds raised from the sale of the Mahajanwadi.

Thereafter, the development costs for the Oshwal Vision would be in the region of c£20m, giving a grand total of c£23m in the longer-term. These are the estimated costs at the current time. These may change once we are aware of what the planning authorities may approve once we pass the Pre-planning discussions and approvals.

Additional, a brief outline of the likely income generation projection from the new and extended facilities was provided, with a brief outline of the likely initiatives where the additional net income could be utilised, such as creation of an Oshwal Nursery and Prep-School, the development of Local Community Centres in Areas outside of London, the development of various member services like regular coach services, etc.

Summary of the Presentation

Rexbhai, our past President, then provided a summary recap of the presentation of the three items for approval, highlight the visionary steps the Community now needs to take to ensure the long-term continued prosperity of Oshwals in the UK.

Heminiben, then outlined some guidelines for the Q&A session which followed, which Tusharbhai and Rexbhai, our past President, facilitated.

Following the Q&A Heminiben outlined the procedure for the voting which members of the Board of Advisors (BOA) were responsible for overseeing. After the ballot papers were collected from members and counted and re-counted by the BOA members, the results were announced by Ashwinbhai Shah, our past President.

The results for the voting were as follows:

All items were thus duly APPROVED by members.

Tusharbhai and Rexbhai thanked the members for their support and Heminiben closed the SGM meeting.