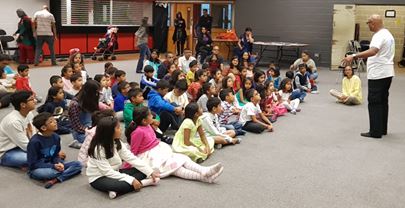 SCVP Jain School, run by Veerayatan UK, were invited again this year by Oshwal NW to deliver Paryushan4Kidz at Harrow Leisure Centre after last year’s successful event. The session spanned the morning from 10.00am to 12.30pm and the theme for this year was twofold. The first was to communicate to the children their identity as a Jain and the second was to explore Mahavir Bhagwan’s message of friendship, love and respect for all.

An expectant group of seventy plus children arrived, ranging in age from 5 to 12 years. It was very encouraging to see so many children participate and parents making the time to bring their children to this activity.

The morning started off with prayers such as navkar mantra and logassa, a few stretches, and some meditation as a whole group. This was followed by some ice breaking and bonding time activities which were led by our very motivational Shaileenbhai.

For the main learning activities, the children were split into smaller groups depending on age and each group was facilitated by experienced SCVP teachers. Some older children who attend SCVP also volunteered their time to help teach and look after the children. Oshwal North West parents and volunteers looked after the under five-year olds and created some beautiful rangolis of the Jain Om.

The first activity was conducted with the objective of ensuring that children were able to recognise their identity as a Jain. Meanings of phrases and festivals such as ‘Jai Jinendra’, ‘Mahavir Jayanti’, ‘Michami Dukhadam’, Diwali and Paryushan were explored including some artwork. As it was Paryushan, the importance of forgiveness was also explained to each group and the Khammemi Savva Jive prayer for forgiveness was taught.

This was then followed by an exploration of who Mahavir Bhagwan was. The children very quickly learnt to sing a song in English composed by one of the SCVP teachers, Sonalben, which communicated the various stages of Bhagwan’s life. This was then followed by exploring, through the use of stories, Mahavir Bhagwan’s values of friendship, love, compassion, appreciation, being
fearless, giving and respect. The stories of the snake which Mahavir Bhagwan and his friends came across when playing and the story of Chandkaushik were used to show how Mahavir Bhagwan’s nature was based on friendship with all. These values were also carried through in arts and craft work, which children of all ages loved to do.

Mahavir Jayanti kalyanak was celebrated by singing ‘Happy Birthday” to Mahavir Bhagwan and all the children were given a cake to take home for prabhavna!

All the SCVP teachers really enjoyed the morning session. With the smiles on the children’s faces at the end, we hope they did too! These annual sessions are a valuable opportunity for children unable to regularly attend a Jain School such as SCVP to keep attuned to our religious traditions and values and are to be welcomed. Oshwal NW are to be congratulated for arranging them.

After the program snacks was served. All credit goes to Bhartiben, Sailesbhai and Hinaben. Also thank you to all the volunteers who helped us throughout the program.

To see the picture from this years Paryushan4Kidz – Click Here

Back to North West Area page.