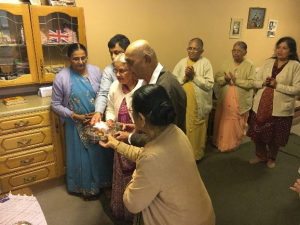 Once again this year, Aymbil Oli was conducted at Vaghjibhai and Maniben Shah’s residence for which we are sincerely grateful. Each evening 10-15 devoted members congregated for the Pratikraman with other members joining in afterwards. Kamuben Jayantilal Shah, Maniben Vaghjibhai Shah and Jayaben Kantilal Shah narrated a Pravachan sent by Maharaj Saheb from India. The evenings concluded with Aarti, Mangal Divo and the distribution of Prabhavnas. 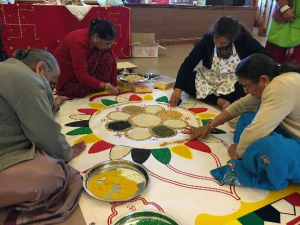 This year Mahavir Janma Kalyanak was celebrated on Sunday 23rd April 2017 at Shree Sanatan Mandir. Besides the arrangements prior to the event, the day started with volunteers arriving to help with the event at 7am in the morning. It is remarkable to see how all got on with various activities … from cleaning the utensils to chopping the vegetables, from the ‘vaghar’ to the setting up of the tables and chairs. Some volunteers took part in decorating Siddth Chakra Patt. 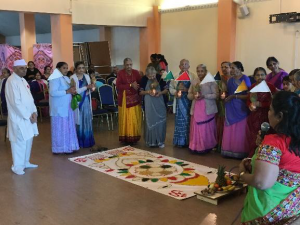 After the recital of prayers, lunch was served. All waited patiently in orderly queues as the volunteers worked tirelessly warming up and refilling the serving bowls. Members caught up with each other in a jovial atmosphere over the luncheon. 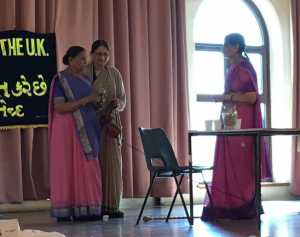 After lunch all settled down for Bhakti and religious entertainment where some members took part in performing two short plays – one of the plays was in relation to World Earth Day looking at ways to protect our surroundings and the planet as a whole, and the other one concerning Charity and Community. 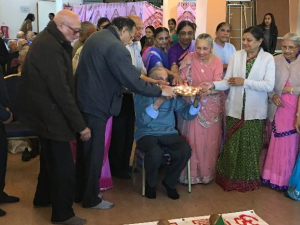 The afternoon concluded with Aarti, Mangal Divo and Shanti Kalash, and to end the afternoon tea and biscuits were served. 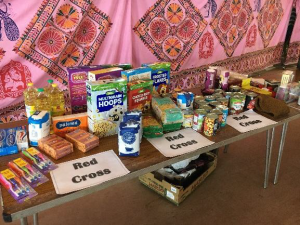 In the past 2 years, we had collected a significant amount of food items that were donated to the Red Cross to be distributed to street sleepers, asylum seekers and refugee families. We had the opportunity to do the same again this year. A collection of dry foods was made to be donated to the Red Cross. Several members generously brought various items including biscuits and canned vegetables for this noble cause.