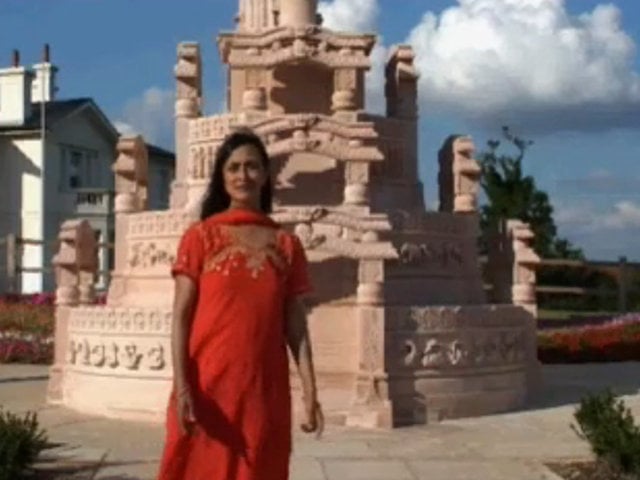 The following video has been done by Victoria and Albert Museum, the world’s leading museum of art and design, where our Oshwal Member, Nila Shah gave a summary representation of samavasarana.

Transcript of the video

I am going to talk about this sculpture at the Jain temple at Potters Bar which represents the Samavasarana. Details about the Samavasarana have been dealt with in the Jain scriptures, namely the Agamas.

What is a Samavasarana? Basically it is a religious assembly for a Tirthankara. Thousands of years ago, divine pavilions were created and constructed for each Tirthankara to deliver his first discourse relating to Jain dharma, Jain religion and paths to liberation.

Innumerable heavenly gods, human beings and animals, all with different attitudes, used to gather in the assembly to listen to the first sermon of the Tirthankara. Beholding of Tirthankara in his Samavasarana sitting in his proximity, listening to his discourse, seeing his beauty and coming under his aura is very spiritually inspiring. The Tirthankara speaks in Ardhamagadhi language which is the language spoken in Bihar in medieval times, it gets converted to a language which gets understood by all beings present in the Samavasarana.

The outermost tier is used for parking vehicles, the middle tier is for animals and birds all with five senses and the innermost tier is for the Tirthankara’s disciples, the aesthetes, the human beings, the heavenly gods and all other disciples.

The importance of Samavasarana to me personally is I have been born into a human being from one soul into another, have been going on from cycles of birth to death and over again. In this human being form, I try and think for myself, ‘have I ever attended a Samavasarana, have I ever listened to a Tirthankara’s discourse?’ And I try and imagine that I have, maybe that is the reason I am a human being at present. I had been listening to the Tirthankara’s discourse, to his preachings, to what he taught me about Jain dharma and getting liberated.