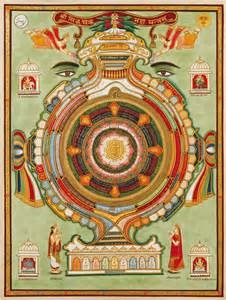 According to the Jain tradition the lived at the time of the 20th Tirthankar Munisuvarat Swami who lived approximately 1.1 million years ago. As the story goes King Shripal was suffering from leprosy and was married to Mayanasundari who took him together with 700 lepers to a monk names Munichandra for the cure. The monk instructed them for the cure on how to perform the Siddhachakra Mahapuja with a particular type of fasting known as ‘oli’ which worked.

The diagram represents the whole Jain Dharma which are the nine elements (Nav Pad) and the protective deities. The main section is in the form of an auspicious pitcher (kalash). It has two main components which is the core. Nav Pad which consists of circles 1 and 3 which represents the Siddhachakra which is used in the Poojan. The second main component is the protective rings of deities. The focus on these protectors makes the worldly benefits of the Siddhachakra more understandable and attractive.