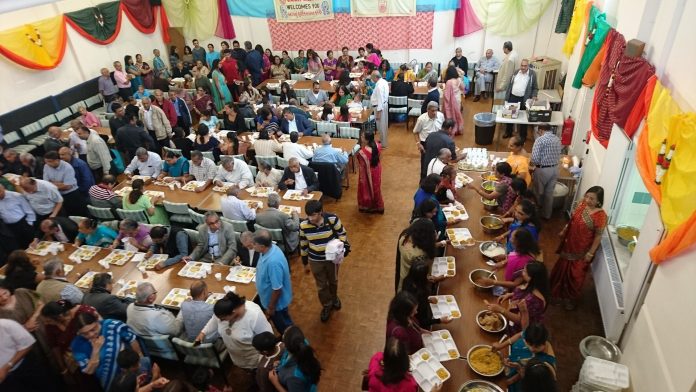 Members of the west area celebrated the most important Jain festival of the year for the third year running at The Oshwal Shakti Centre in Hounslow.

Committee members and volunteers came in on Bank holiday Monday to decorate and clean the hall for the arrival of Mahavir Bhagwan.

This year the emphasis was on the young members of the community and the programmes were arranged accordingly by the committee.

On the 4th day of Paryushan Parva, members of the EC along with the Oshwal walkers visited the centre to take part in our festivities. The children of Gujarati school  enlightened the whole community with their performances on Jain values and  a beautiful dance (the children had been practicing only a few weeks because of the summer holidays, but managed amazingly). It was great to see so many youngsters. There is a short video on the website.

The atmosphere was electrifying with great joy, our honorary president congratulated the children on their brilliant performance and re-iterated that they are our future leaders of the association. He then introduced THE OSHWAL WALKERS GROUP.

The OWG presented the West Area with a donation of £15,000 for the SHAKTI CENTRE project.

You can view pictures from Paryushan here.

Savantsari Bhojan was held on Sunday 18/9/16 at the Oshwal Shakti centre in Hounslow.

Preparations for the Bhojan began on Saturday with an army of volunteers and committee members.

Volunteers are the heart of our community and they all deserve a pat on the back for selflessly giving up their time.

The Savantsari Bhojan had a great turnout, the hall was full to the brim including the balcony, and the PMC did a great job of crowd control inside and out.

We had people from age few months to 90+.

This is great community spirit.

You can view pictures from the “bhojan” here.