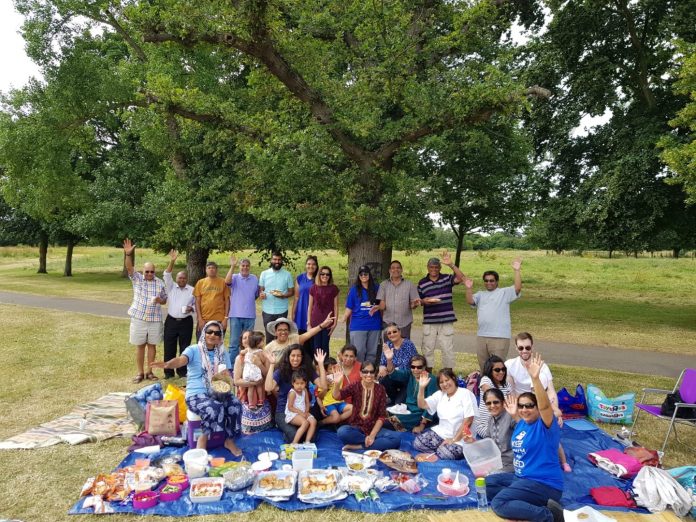 National Picnic Week!!! For our first youth event we decided to hold a Picnic in the Park to celebrate National Picnic Week for the young and the young at heart. The picnic started with all the volunteers turning up ‪around 2pm‬ to help set up in Lampton Park. We were blessed with wonderfully blue skies and a lot of sunshine as well as a light breeze which was perfect picnic weather.

We decided to start with a short game of cricket. This was met with a lot of enthusiasm from the (much, much) older ’kids’ with competitive cheers of “SIXER!” and “CATCH IT!” being screamed with each swing of the bat. This was followed by the dreaded Blueberry-Spoon Race. Attendees were asked to pair up and a relay race was organised with a spoon full of blueberries. What’s the catch you ask? You have to hold the spoon facing outwards between your teeth! It was a hilarious sight, watching the children and adults struggling to relay the spoons without dropping any blueberries and the look of sheer concentration etched on their faces. After holding a best of three race, Jinitaben and Arvindbhai came out as the winners of the event. However, like a typical Indian picnic this has been disputed many times as lots of cheating went on! Carrying on with the racing theme, we asked the pairs to balance a football balloon (kindly donated by the 3Mobile Company to one of our young at heart) between their backs and race back and forth across our track. The children were surprisingly good at this activity and the race was won by Nayan and Rhea in record time. The adults took slightly longer but did get there in the end. Our last game was Adults Vs Kids. Ashmiben kindly brought a parachute which was spread out and lifted by the adults. The aim was to try and trap the kids underneath as it came down the children tried to run between the adults and escape to the other side. The children really enjoyed shouting “Catch me if you can!” whilst running wild and free under the parachute.

At this point in the day everyone had worked up considerable appetite which led well in to the last and most important element of the picnic – the food! Volunteers had generously prepared one dish each and we had a wonderful spread to suit everyone’s taste buds. I’m sure the pictures aren’t doing it justice. The drinks also had a nice variety of fruit juice, fizzy drinks, and our wonderful Chairlady became a Chai-wali for the day with her brew of masala-chai. We wound down the afternoon feasting and chatting away until pack up. Wanting the children to leave on sweet note, they were all given a cone of vegan sweets kindly donated by the “Sweet Dream Candy Cones” company owned Dipti Ramesh Shah.

On behalf of the West Area Committee and the youth subcommittee, I would like to thank everyone who came and helped us create such a wonderful afternoon. Huge shout-outs to Ashmiben, Ashwinbhai, Tejalben, Khushbuben, Neilbhai and Artiben for their help with the day.